ENJOY the festival as one of our sponsors 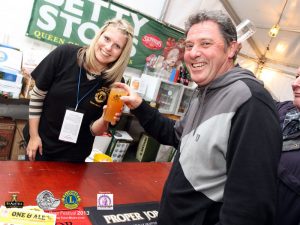 If you are a local business looking for a great way to get noticed and help support local good causes while having a bit of fun too, then the organisers of this year’s Newquay Beer Festival believe they have just the thing which fits the bill.

Newquay Towan Blystra Lions Club, the charity which organises and runs the highly popular festival which is now in it’s eighth year, are keen to hear from anyone who would like to get involved as a sponsor or advertiser with opportunities which start for just £30.

Lion Phil Bunt, who has seen the popularity of the festival grow every year says that those businesses and individuals who have supported them since 2013 regularly agree to help year-on-year because they really enjoy being part of the event.

“We have such a brilliant community spirit amongst so many people in the Newquay area and that manifests itself every year when we seek their support in funding the Beer Festival,” said Phil. “Our most popular option is the sponsorship of a barrel of beer or cider – the sponsor gets a their logo or photo on the front of a barrel, in the programme and on our website but they also receive four three-day passes to the festival and each ticket holder gets a complimentary pint on arrival. You can see why it’s so popular.”

Time is running short to get involved in this year’s festival though and expressions of interest in helping sponsor Newquay Beer Festival, which is held at Hendra Holiday Park, need to be made soon, so have a look at the forms below  or give Phil a ring on 0345 833 4981.